Part Two
One by one the students stopped working, peering up in confusion. Our Library Media Specialist (Alison Smithwick) and a Technology Coach (Elizabeth Benno) had slipped quietly into the room. They appeared to be in a boat, and were pointing and pausing to confer and take notes. After sailing down the coast of our classroom, they quietly disappeared.

Then the fun began!
Students had to figure out what the strange visitors were doing based on the observations kids made. They were able to infer that our visitors were on a ship drawing a map. It turned out that my tribes had just witnessed Alonso Alvarez de Pineda sail along the coastline of Texas! A fantastic discussion ensued using the following criteria:

Based on your research of your specific tribe's customs, beliefs, and culture, how do you think your tribe reacted to seeing Pineda's ship go by?

The students' in-depth understanding of each tribe was phenomenal and contributed to the lively discussion. They were thoroughly engaged and ready to write their first journal entry recording the historic event...from their tribe's point of view.


Along with the journal entry, they began a Google Slides presentation within Google Classroom to record each explorer's name, home country, motivation, achievements, and impact (if any) on the settlement of Texas. We then added each event to a timeline with 1-3 corresponding journal entries attached. Each explorer's path through Texas was recorded on the floor with colorful tape.

The excitement in the room remained high for weeks as kids wondered when the next "explorer" would visit. Cabeza de Vaca came through two times courtesy of our school counselor (and author), Bryan Smith (@kidauthorsmith). This time the major challenge was communication. Students had to figure out what deVaca needed without being able to speak his language or understand his culture. Discussion, timeline slides, and point-of-view journal entries followed each visit.
A particularly entertaining explorer was Marcos de Niza, played by our principal, Kevin Parker. He
slammed the classroom door open startling the kids and began demanding in Spanish to know where to find the 7 Cities of Gold. Pictures of distant pueblos were on the wall for certain kids (who were in the know) to point to. When de Niza left in a panic, he flipped one of the boys out of his chair. It was unexpected, the kids loved it and still talk about it!


Another fun explorer was Coronado, played by 2nd grade teacher, Doug Knoerr. He was the last Spanish explorer to visit. As you can see in the following reflection, some students were so enthralled with this activity, they researched and tried to utilize the actual language of their tribe. 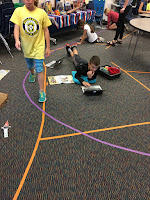 From Mrs. Smithwick to Mr. Knoerr, the school came together to help my students witness history in action. Students responded with high levels of engagement and reflections that went above and beyond expectations. The ownership they displayed for their tribes and territories continued to grow. This makes the next section of the lesson even more powerful.

Stay tuned as students react to their lands being taken away, and others transition into the role of settlers. The perfect recipe for lively debate!

If emotion makes meaning and drives learning, how are we doing so far?

How I Make History Real for My Students, Part 1

"Hey, Mrs. Dahl. You should let us section the room into our tribal lands," one student earnestly opined on his way out after class. Another chimed in, "And we should have to sit in our own tribe's region!" We had just begun a unit about the Native American tribes of Texas. We spent time as a class building criteria for our reports based on what kids were expected to learn. They had picked groups, chosen a tribe, and would begin research the next day.  My brain immediately went into overdrive with all the possibilities!

When kids arrived for class the next day, they found the floor sectioned off with orange tape to represent the approximate locations of the tribes in Texas long ago. Students had to stay in their own region (no matter what subject we were working on) unless they got permission from another tribe to pass through their lands. If a student needed something (chair, pencil, etc) that was located in another region, he would have to trade for it. However, in order to trade, they had to know enough about each others' tribes to know what was available to trade. Suddenly, learning about the tribes took on special meaning and students began to research in earnest.

Soon, one group placed signs in its region showing what natural resources and other goods their tribe had to offer. Others rapidly followed suit. In this way, they got to know the location and resources of all the different tribes of Texas. One day the Comanche group realized their tribe was more aggressive, and therefore unlikely to bother asking for permission. They began to roam the room without much concern until an enterprising young man from a bordering tribe raided for some comfortable chairs left unattended. After that, they stayed closer to home.

Students began to feel a kinship with their chosen tribe. Because of this feeling, the research became more personal. By the time research was finished and the presentations were shared, their depth of knowledge for all the tribes of Texas was sincerely impressive. In fact, they were able to transfer the knowledge of their tribe into point-of-view journal entries that will be discussed in the next installment of this adventure. The reports and presentations all exceeded the criteria of expectations we had set together.

Once the research was finished, students stayed in their regions rather than going back to their usual tables. This worked out very well because they had surprises coming. Stay tuned to see what happens when visitors appear unexpectedly in class as Spanish or French explorers. Then missions appear. Colonies begin to take lands from our tribes. Students journal through it all from the point of view of their chosen tribe's beliefs and customs.

Make history real by giving it meaning...make it personal for more of an emotional connection. Remember, emotions drive learning. Letting students drive how things happen goes a long way too!
Posted by Diane at 8:18 PM No comments:

Change Your Thinking, Change Your Brain. Click the image to purchase this poster in my TPT store.

My Good Reader shows what good readers do using a fun brain based strategy. The poster is available on TPT. Just click the image to visit the store.

Connect literacy and math! This poster shows what good mathematicians do. It is a companion piece to the Good Reader poster above. Click the image to purchase.